The Sacred Mounts of Piemonte and Lombardia, the Calvary Mount of Banská Štiavnica and Kalwaria Zebrzydowska have all received an important recognition of the UNESCO that has inserted these extraordinary devotional complexes into its World Heritage List.
The birth of these sites is linked to the Holy Places of the New Testament, to which, already in the 4th century, intense pilgrimages began to take place by land and by sea. With the fall of Constantinople, in 1453, and the domination of Turkish power in the Orient, these pilgrimages to the Holy Land lost their characteristics of mass movements, and became very expensive and often dangerous adventures, from which one could even risk not returning. Because of these hardships, for believers who could not afford to undertake an expensive and risky journey and to keep alive the sense of the peregrinatio, the Church introduced in the West the so-called pratiche sostitutive, substitute practices: pilgrimages to easier to reach localities and sanctuaries which in some ways evoked the scenarios of the Gospels.
Towards the end of the 1400s, the Franciscan friar Bernardino Caimi of Milano, on his return from the Holy Land, decided to replicate, with fidelity defined as topomimetics, the holy places of Palestine. This is how the Sacred Mount, or the “New Jerusalem” of Varallo Sesia, originated, in Piemonte. The complex, defined as “gerosolimitano” for its topographical similarity to the original site, gave life to an ideal or virtual pilgrimage to the Holy Land, that was not expensive or risky, and therefore, could be repeated.
Following the Council of Trent (1545-1563), the idea spread that it was possible to practice the devotions to the Passion of Jesus anywhere, with recourse to a variety of religious symbols. It was based on this context that, starting in 1601, Kalwaria Zebrzydowska began to be built in Poland. Here, too, the design and the construction of the devotional complex responded to the need to make the Calvary as similar as possible to the topography of the original sites in Jerusalem as it was in the time of Jesus Christ.
From 1744 to 1751, the Calvary Mount of Banská Štiavnica was built in Slovakia. This monumental complex was influenced by the imperial court of Vienna, that expressed the idea of manifesting devotion in a new way: give material expression to feelings of gratitude for blessings received. This expression was to become not only the symbol of the Counter-Reformation, but also the dominating feature of the city of Banská Štiavnica and its surroundings. 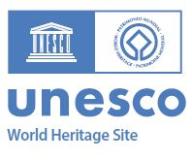