On the rocky spur overlooking the town of Varallo, at the end of the fifteenth century the Franciscan friar Bernardino Caimi designed a small Holy Land. He built simple, rural edifices, meant to re-create the main landmarks of Jerusalem linked to the life of Christ and to evoke the events occured in those places, with images, paintings or statues made since 1486.

In the early sixteenth-century, the renown painter and sculptor Gaudenzio Ferrari produced spectacular life-size statues, decorated with colourful clothes, beards and hair, located within the chapels built by Caimi. The extreme realism of these scenes, associated with illusionistic wall-paintings, deeply involved the beholder in the sacred drama and became the model for all the chapels built in the following centuries.

After 1565 the Sacro Monte was expanded and remodelled, following the project of the famous late-Renaissance architect Galeazzo Alessi, who collected his drawings for the Sacro Monte in a book known as 'Libro dei Misteri' (Book of the Misteries of Christ’s life). Even though it was only partially executed, the project by Alessi was the starting point for all subsequent development.

During the Counter-Reformation, thanks to the intervention of the Bishop of Novara Carlo Bascapé and his successors, the Sacro Monte turned in a sort of petrified religious theatre, aiming at illustrating a morally uplifting sacred history, by the means of life-size paintings and statues inspired by the works of Gaudenzio Ferrari. The stunning realism of the scenes transformed the chapels into snapshots of real life, produced by prominent artist and such as Tabacchetti, the Fiammenghini, Morazzone, Tanzio da Varallo, Giovanni d’Enrico, Pier Francesco Gianoli, Dionigi Bussola, Giovanni Battista Bernero and Benedetto Alfieri.

The Sacro Monte is also a park-garden, a great rural Way of the Cross climbing up the hill. At the same time, it has the appearance of an ancient fortified city built on a rocky hill, with walls, monumental gates, two squares - civic and religious -, porticoed palaces and piazzas, inhabited by statues and painted characters. The Sacro Monte is theater, art, architecture, garden and forest.

Varallo, Valsesia and Monte Rosa: the wonder of the Alps among Nature, Art and Tradition 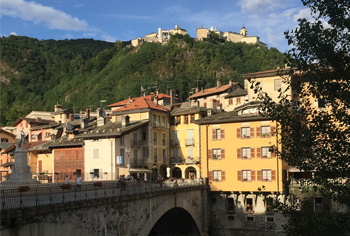 Varallo, Valsesia and Monte Rosa: the wonder of the Alps among Nature, Art and Tradition